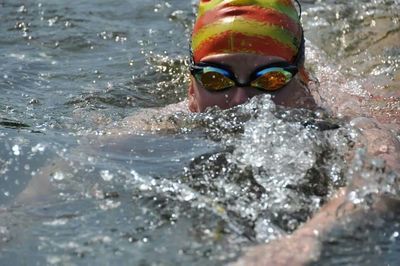 Georgia Amison competes in the Oceanman in Spain

Oceanman is a series of open water swims organized by Aida Molina and Culture Sport 365 and is conducted between April and October.

Oceanman was nominated for the 2019 WOWSA Awards in the World Open Water Swimming Offering of the Year category as follows:


The Oceanman Series has analyzed and taken the best open water event ideas from around the world and creatively packaged and executed them in beautiful 19 scenic locations around the world. Competitions with multiple race distances in Mexico (Yucatán + Cozumel), Bali, Alanya (Turkey), Spain (Costa Azahar + Benidorm), Ecuador, Russia (Sochi + Moscow), Italy (Polignano and Orta Lake), Greece, Lausanne, Colombia, France, Ukraine, Thailand and Cyrus culminate in a world championship in Cancún, Mexico, and include a comprehensive coaching certification program and very festive post-race celebrations. For organizing an exciting, enjoyable global open water swimming series under a cleverly branded umbrella for swimmers of all ages, abilities and backgrounds, for expanding into how to teach athletes how to reach their potential through seminars, a certification program, and longer UltraOceanman races for swimmers who want to greater challenges, and for designing the entire experience from the perspective of the open water swimmer who wants more, the Oceanman Series experience is a worthy nominee for the 2019 World Open Water Swimming Offering of the Year.

The Oceanman series includes the Oceanman Altea in April, Oceanman Palamos in May, Oceanman Orta in Italy followed by Oceanman Cala Montgó and culminating in the Oceanman grand finale in Benidorm, Spain.