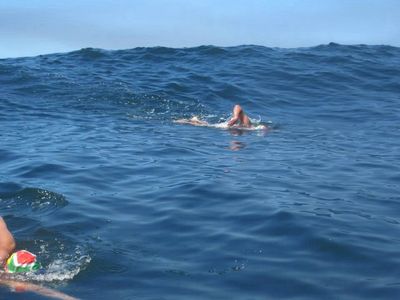 Martin Goodman swimming to Robben Island from 3 Anchor Bay in South Africa, together with Roger Finch and Theodore Yach with the help of Derrick Frazer

noun - Railroading is the use of the power of ocean swells that are going in the same general direction as an open water swimmer. As the ocean swells build up behind and beneath the swimmer, experienced swimmers increase their kick and their stroke rate, as well as lengthening out their stroke, enabling them to sprint in conjunction with the power of the swell. This provides them with an incremental boost from the swell's power and direction, as a type of body surfing. As the ocean swell passes the swimmer reduces their kick and stroke rate back to their normal cadence, enabling them to catch their breath until the next ocean swell comes.

Railroading is often done along The Wall during the Cold Half and Clean Half extreme marathon swims in Hong Kong.

As she turned the final buoy and headed in to shore, the swimmer railroaded the final 200 meters and caught a wave in the impact zone, passing ten of her competitors at the finish.

Usage dating to circa 1985 from Steven Munatones of Huntington Beach, California.