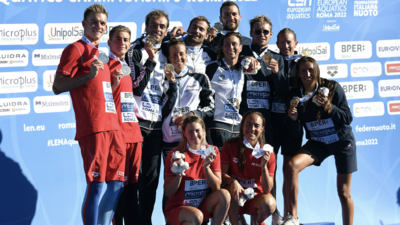 Exchange area of the 4-person relay at the 2017 FINA World Championships in Lake Balaton, Hungary. Photo by Deep Blue Media. 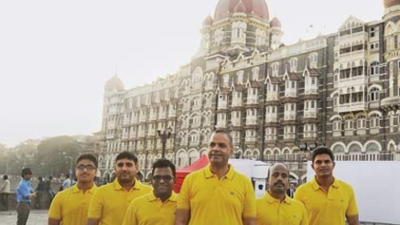 The Sea Hawk was a team of 6 Indian open water swimmers who completed a charity swim of 433.11 km (269.1 miles) from Dona Paula in Goa along the Konkan coast to the Gateway of India in Mumbai, India in 156 hours between 13-19 February 2015 that included Paramvir Singh, Gullupilli Narhari, Ankan Kumar Patel, Vicky Tokas, Ganesh Palande, and Manav Mehta 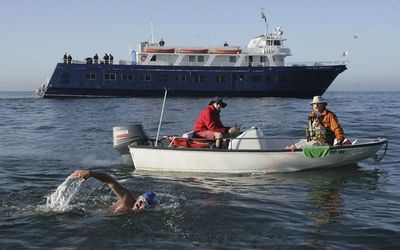 Kurt Baron swimming alongside the Pacific Monarch in the Ventura Deep Six relay en route on a 202-mile course together with Jim Neitz, Mike Shaffer, John Chung, Tom Ball, and Jim McConica far off the coast of California in 2010 from Ventura to La Jolla 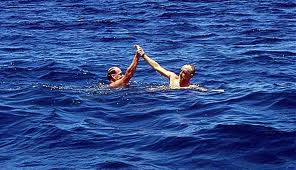 Relay exchange during the Maui Channel Swim from Lanai to Maui 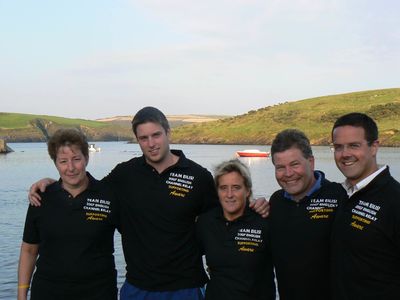 noun - A relay is an athletic competition with more than 1 athlete as part of the team. During an open water swimming relay race like a team pursuit competition, members of a team can take turns (legs) swimming for a specific duration of time or distance. Each individual on the team swims legs on the relay with exchanges or change-overs when one swimmer replaces the other during the course of a relay.

A pool swimming relay consists of four swimmers who swim all freestyle or each individual stroke: butterfly, backstroke, breaststroke, and freestyle.