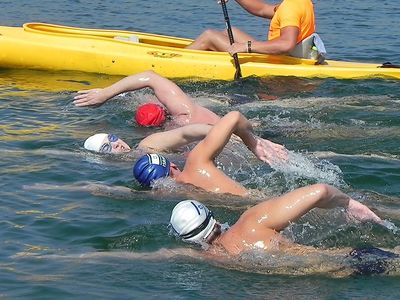 Theodore Yach (in red swim cap), Avishug Turek (in white swim cap breathing to left) and pace swimmers on a tandem swim across the Kinneret or Sea of Galilee in Israel 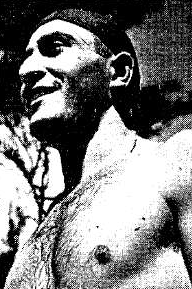 Yitzhak Yehezkel, a pioneering Israeli open water swimmer of the 1940's and 1950's who was the first to successfully cross lengthwise the Sea of Galilee

At 214 meters (702 feet) below sea level, it is the lowest freshwater lake on Earth and the second-lowest lake in the world (after the Dead Sea, a saltwater lake). The lake is fed partly by underground springs although its main source is the Jordan River which flows through it from north to south.

The Sea of Galilee (Kinneret) is situated in northeast Israel, near the Golan Heights, in the Jordan Rift Valley.

The modern name, Kinneret, comes from the Old Testament or Hebrew Tanakh "sea of Chinnereth" in Numbers 34:11 and Joshua 13:27, and spelled "Chinneroth" in Joshua 11:2.

All Bible writers use the term "sea" (Hebrew yam or Greek thalassa) except the gospel of Luke, written to Theophilus of Macedonia, where it is called "the lake of Genneseret" in Luke 5:1, from the Greek λίμνην Γεννησαρέτ, (limnen Genneseret), the "Grecized form of Chinnereth" according to Easton, who says Genneseret means "a garden of riches".

There have been several lengthwise crossings of the Sea of Galilee:

The Galilee Marathon Swimming Association by Guy Cohen and Eyal Schachner of Israel was nominated for the 2020 WOWSA Awards in the World Open Water Swimming Offering of the Year category with the following nomination: The Galilee Marathon Swimming Association was on a roll. Co-founders Guy Cohen and Eyal Schachner researched and compiled several decades of historical data about widthwise and lengthwise crossings of the Sea of Galilee since 1944. They planned, prepared and promoted the longest and most difficult solo swimming course in Israel in order to meet a growing domestic and international interest. But then the COVID-19 pandemic hit and everything came grinding to a hall. But the Association got busy again after lockdowns and travel restrictions were lifted and were able to safely organize and officially ratify the marathon swims and relays for 34 swimmers. For their energy, wisdom, seriousness that Guy Cohen and Eyal Schachner bring to the sport of marathon swimming, for their meticulous planning and organization of swims in a safe manner during a pandemic in the Sea of Galilee and the Mediterranean Sea, for their data-filled website and authoritative resources that they make available to the international community, the Galilee Marathon Swimming Association is a worthy nominee for the 2020 World Open Water Swimming Offering of the Year.

Avishag Turek's Sea of Galilee two-way crossing was nominated for the 2019 World Open Water Swimming Performance of the Year award as follows:


The 21 km lengthwise crossing of Sea of Galilee is rapidly gaining in popularity with the increased participation of marathon swimmers, administrators, officials, volunteers and pilots in Israel. Avishag Turek has emerged as the most prolific marathon swimmer and became the first person to complete a 41 km two-way crossing of the Sea of Galilee in 14 hours 54 minutes. The 43-year-old’s pioneering efforts are inspiring others – domestically in Israel and international swimmers from around the globe - to follow her large wake of accomplishments. For being the first Israeli to complete the Triple Crown of Open Water Swimming and achieving many other firsts for Israeli marathon swimmers, for helping promote marathon swimming in the Sea of Galilee, and for serving as a role model and Israeli icon with her unprecedented feats, the Sea of Galilee two-way crossing by Avishag Turek is a worthy nominee for the 2019 World Open Water Swimming Performance of the Year.

The Sea of Galilee is also site of the mass participation open water swimming event called the Sea of Galilee Swim that attracts over 10,000 participants annually in September. The Sea of Galilee Swim is the largest amateur sports event in Israel and has been held 61 years commemorating the Jewish New Year (Rosh Hashanah). The event course goes from Ein Gev to the finish in Tiberias. It is one of the World's Top 100 Open Water Swims and includes 3 distances: 1.5 km, 3.5 km and 6 km.

Sea of Galilee is part of the Stillwater 8, a solo marathon swimming challenge created by Michelle Macy: