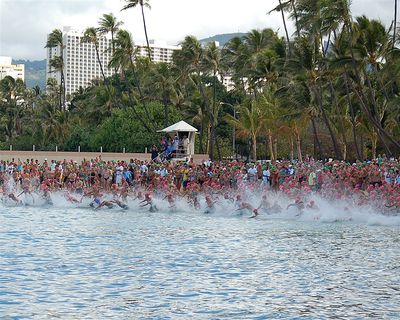 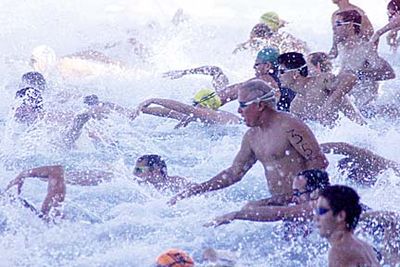 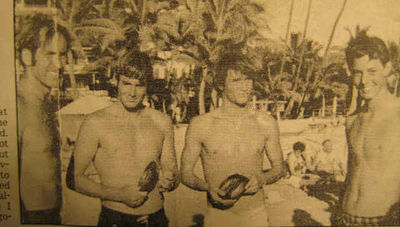 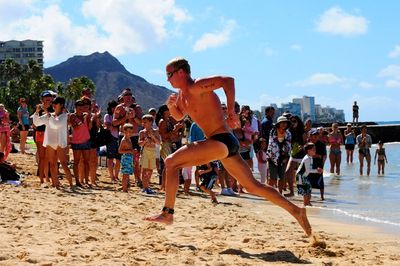 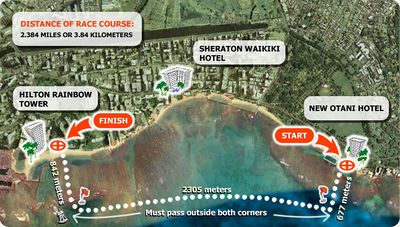 The Waikiki Roughwater Swim (WRS) is one of the world's greatest open water swimming events and is annually listed in the World's Top 100 Open Water Swims list and America's Top 50 Open Water Swims. The swim starts near the Diamond Head volcano, goes across the Waikiki Bay on the island of Oahu in the state of Hawaii.

The iconic point-to-point ocean swim was the inspiration for the swim leg of the Hawaiian Ironman triathlon and the Double Roughwater and is organized by the Waikiki Roughwater Swim Committee Inc.

The Waikiki Roughwater Swim is annually named as one of the World's Top 100 Island Swims by the World Open Water Swimming Association.

Out the Kapua (Outrigger Canoe Club) Channel, across Waikiki Bay, and in the Hilton Hawaiian Village Hotel channel. Course will be marked by flags every few hundred meters.

The start is at Sans Souci Beach (Kaimana Beach), near the base of Diamond Head between the Natatorium and the New Otani Kaimana Beach Hotel, Waikiki on Oahu. There will be staggered starts at 5-minute intervals beginning at 9:00 am.

To reduce crowding at the start, the field will be divided into groups of approximately 150 to 200 people based upon entry times. The fastest swimmers will be in the first group and slower swimmer in the succeeding groups seeding is first come, first serve. Late entries may be put into slower groups depending on availability. The race committee reserves the right to place you in any group. If you have been unable to finish in the past or have difficulty swimming 2000 meters you should not enter unless you have significantly improved your swimming ability. If you swam last year’s Waikiki Roughwater Swim, please enter your time (can be found on the 2010 Waikiki Roughwater Swim Official Results) in the space provided on the application form.

Safety is the most important concern. There will be boats and paddlers on surfboards patrolling the racecourse. Swimmers are responsible for their own physical condition and are encouraged to train adequately and have a physical check-up prior to the swim. Swimmers who have not passed the buoy No. 10 by 11:00 am will be pulled from the water. All non-finishers will be taken to the Ala Wai Boat Harbor.

Duke Kahanamoku Beach in front of the Hilton Hawaiian Village Hotel. Swimmers must cross the finish line, which will be 20-30 meters up the beach from the water’s edge. To be an official finisher, you must complete the race in less than 2 hours and 40 minutes and wear a swim cap, during the race and while crossing the finish line.

Notes: proceeds to go to Swim With Mike.

For the 42nd consecutive year dating back to 1970, some of the world’s top swimmers will unite in Honolulu, Hawaii to partake in the Waikiki Roughwater Swim, one of the world’s oldest and most iconic open water competitions. The 2.384-mile (3.84 km) race takes place this Monday (Sept. 5), Labor Day, beginning at 9:00 am (HST) at Sans Souci Beach between the Natatorium and New Otani Hotel. It will finish at approximately 12 noon (HST) on Duke Kahanamoku Beach at the Hilton Hawaiian Village Hotel. The top finishers are expected to cross the finish line in roughly 45 minutes, at about 9:45 am, while the final swimmers should come in close to noon.

Group “A” of the Waikiki Roughwater field begins its swim at 9 am, which includes the top-100 finishers from the 2010 race, all prior overall and divisional first place finishers, and current NCAA and high school All-Americans. The swim continues with four subsequent groups taking off in five-minute intervals. On Sans Souci Beach, competitors will initially swim 0.42 miles (677 meters) into the open water. For the bulk of the morning, they will then head north up world famous Waikiki for 1.43 miles (2,305 meters), followed by the 0.52-mile (842 meters) homestretch to the finish line at the Hilton Hawaiian Village Channel.

The race is held in conjunction with the seventh annual Swim with Mike, a scholarship fund providing financial means for advanced education to physically challenged athletes. This year’s scholarship recipients include Michael Fritschner and Corey Obungen, victims of spinal cord injuries. Fritschner was a standout varsity high school quarterback as a sophomore, before his family took a Hawaiian Island cruise in June, 2006. After arriving in a secluded surf area, Fritschner soon caught his first wave and stood up for a few short seconds, the last time he would stand unaided. He fell off the board and realized that he had no feeling in his legs. During his rehab process, however, Fritschner has refocused and has served as a varsity basketball manager, Athletic Commissioner, Homecoming King and Student Body President. He attends Kennedy Krieger at John Hopkins three times per year in hopes to recover his spinal cord injury, and is now a junior at the University of Southern California.

Obungen attended the University of Hawaii as a freshman, before transferring to the University of Puget Sound where he played defensive back on the football team. He also was on a Hawaiian outing In June, 2010. Upon diving into the water on Lanikai Beach, he shattered his C-5 vertebra, essentially resulting in quadriplegia. Obungen has since attended therapy sessions four nights a week in Tacoma and Redmond, WA, where his mobility is improving. This past spring, Obungen was named the “most inspirational athlete” at UPS, and is now beginning his third year at the school. He is on pace to graduate with a degree in exercise science.

Past Swim with Mike scholarship recipients from Hawaii include 2010 Hawaii Pacific University graduate Joe Broc, along with Keith Kitamura of Kapaa High School and the University of Hawaii, Ann Yoshida of Mililani HS and Utah State University, and current student Tusi Mailo of Kahuku HS and BYU-Hawaii.

Notable entrees expected back for this year’s Waikiki Roughwater Swim include twenty-three year old world champion Chip Peterson of North Carolina. He finished second overall last year (45:46), six seconds behind champion Travis Nederpelt (45:40). Peterson owns a 10K open water world championship from Montreal in 2005, before adding recent 2010 individual titles in the Pan Pacific 10K in Irvine, California and the RCP Tiburon Mile in San Francisco, CA. Internationally, New Zealand’s Kane Radford is an open water swimmer who finished 10th overall (47:43) and third in the male 19-24 division on Waikiki in 2010. He is a national champion in both his home country and Australia in the 800-meter and 1500-meter. Radford is also a 2009 champion in the RCP Tiburon Mile and a 2011 participant in the FINA World Championships in Shanghai, China. Projected top female participants include Luane Rowe of Sydney, Australia, as well as American Suzanne Heim-Bowen. Rowe has won the last three female titles on Waikiki, including last year’s 23rd overall placement (51:18). Her best overall finish was eighth in 2008 (55:01), while also cracking the top-10 in ’09 with her personal-best time (47:21). She has claimed numerous races in Australia, including the 2K Division at the Cole Classic on helly Beach, as well as 1K and 2K ocean swim races on Bondi Beach. In 2007, meanwhile, Heim-Bowen became the first-ever open water swimmer to be inducted into the International Masters Swimming Hall of Fame. Amongst her many claims to fame is swimming the English Channel twice in one week.

All told from the 2010 Waikiki Swim, 10 of the top-20 finishers hail from Honolulu. Plenty of that local talent returns for the 2011 race, including Kacy Johnson, 17, taking 13th overall last year with a runner-up spot in the male 15-18 division (48:06). Johnson is this year’s North Shore Challenge Champion (47:26). Nineteen-year old Jayson Hagi of the University of Hawaii swim team is back from a 48:48 swim, a top-15 overall and third place divisional placement. Other top returnees from the Aloha State are University of Hawaii products Steve Allnut, 22, a 14th-place finisher (48:12) last year and two-time North Shore series winner. Sophomore Ian Wheeler, an Olympic Trial Qualifier in the 400-Free who cracked the top-20 overall on Waikiki (50:01), is also in attendance this year. He is expected to be amongst the top finishers. The entire men’s and women’s University of Hawaii swim teams will participate in “Swim with Mike.” A combined Fifteen UH swimmers will be in the roughwater, while the rest of the Rainbow Warriors and Wahine will swim in the UH pool monday morning. The following link to sponsor the UH swimmers can be accessed through http://www.swimwithmike.org/swimmer/?swimmerID=10848. Of additional local talent is former Waikiki Champion Rick Heltzel of Honolulu, third in the 2010 male 50-54 division (54:47). He serves on the board and leads clinics for Waikiki Roughwater Swim. Hawaii’s top masters’ coach and two-time event champion Joe Lileikis returns from a 1:01.45 time. He is recovering from cancer and chemo treatment from earlier this year. Bill Burgess of Honolulu, 82, returns from 2010 as the oldest competitor listed in the entire field. Nine-year old Dylan Becker of Las Vegas, NV, meanwhile, represents the youngest.

Honolulu is also well represented as the hometown within female roughwater competitors. Betty Ann Barnett, 65, registered an age group winning time of 1:04.12 last year. Fifteen-year old Jasmine Mau is the reigning North Shore Challenge Champion and finished 76th overall last year on Waikiki in 56:08 (top-eight percentile), good for a silver finish in the 13-14 female age group. Charlea Goodness, 17, crossed last year’s finish line in 58:09, second in the 15-18 division before adding a runner-up result in the North Shore race (55:53). Finally, one of the youngest of all-time to attack the Waikiki open water competition is 12-year old Lara Yasumi. She is back from a 1:05.20 performance in 2010, No. 1 in the 11-12 female group and a top quarter finisher within the entire field.

For the first time, the Waikiki swim is offering two free online webinars, presented by Open Water Source, on Sunday, September 4. The first webinar (Session #1) at 10:00 am (HST) is targeted for race officials, administrators and volunteers. In this free hour-long session, author and former Waikiki Roughwater Swim President and race director Steven Munatones will discuss the rules, regulations, procedures and policies of fairly officiating and safely administering major open water swimming competitions. The history, tradition, state, and rules of the sport, basics of officiating (i.e. positioning, posture, equipment), officiating subtleties (i.e. tactics and limitations), and officiating documents are amongst the first webinar topics. The webinar can be accessed on the Waikiki Roughwater here, https://www3.gotomeeting.com/register/414977638.

The second webinar (Session #2) the day before the race will be held at 4:00 pm (HST), and will cover how athletes can dramatically improve and prepare for any open water swimming competition or solo swim. Munatones will share his insights and expertise in discussing the Pyramid of Open Water Success. This session outlines each step of the pyramid which involves base training, speed training, distance tolerance, race specific training, skills training, open water acclimatization, and tactical knowledge. This webinar session can be accessed here, via https://www3.gotomeeting.com/register/186425918.