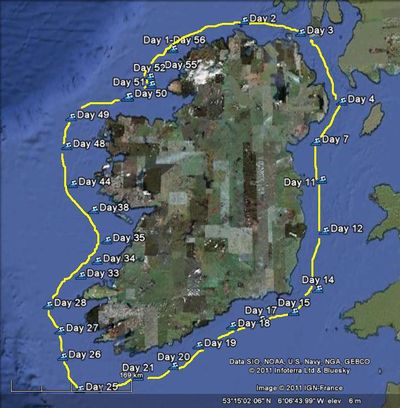 noun - Adventure swimming is the act of swimming in or across any body of water where excitement, drama, uncertainty or risk are inherent elements or issues to consider. It can also be a swim of extreme lengths and time where the distance and duration are relative to each individual. An Adventure swim can start on land, piers, pontoons, jetties, breakwaters, boats and be done in oceans, lakes, bay, estuaries, reservoirs or rivers. An adventure swim may be done with or without the use of aids of any sort (e.g., fins, wetsuits, paddles, technical swimsuit, flotation device, shark cage, protective wear) and can be conducted under any set of rules or course design. Adventure swimming can be attempted or done for personal reasons, pure adventure, new experiences, memories, records, history or promotion (either self-promotion or promotion of a charity, issue or cause). It can be a solo effort or a relay (group) exploit or a Stage Swim.

According to Jamie Patrick, Ultra Adventure Swimming is self-created and self-designed. It is about going beyond limits, exploring abilities, experiencing the world through swimming. It is blazing new paths in oceans, lakes, and rivers just for the simple reason of adventure.

Madswimmers doing high-altitude swimming at 5909m (19,386 feet) in a frozen lake on Mt Tres Cruces, a volcano in the Andes Mountains along the Argentina - Chile border in South America with the water temperature between 0.5 - 2ºC (32.9ºF - 35.6ºC). Jean Craven, Herman van der Westhuizen and Chris Marthinusen completed the 5-minute neoprened wild swim while Evan Feldman and Milton Brest swam in wetsuits and Robert Graaff and Juandre Human were unable to partake in the final swim due to medical restraints after a 6-hour hike up the volcano and a laborious creating of the small area to swim through the 20 cm thick ice covering.