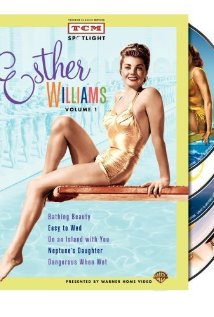 Bathing Beauty is a swimming movie and a 1944 musical starring Red Skelton, Basil Rathbone, and Esther Williams and directed by George Sidney.

Although this was not Williams' screen debut, it was her first Technicolor musical. The film was initially to be titled "Mr. Co-Ed" with Red Skelton having top billing. However, once MGM executives watched the first cut of the film, they realized that Esther Williams' role should be showcased more, and changed the title to "Bathing Beauty," giving her prominent billing and featuring her bathing-suit clad figure on the posters.

The film is also Janis Paige's film debut. After this film Paige would go to Warner Brothers to make such films as Of Human Bondage, Hollywood Canteen, and Romance on the High Seas. In later years, Paige would return to Metro-Goldwyn-Mayer in few films.