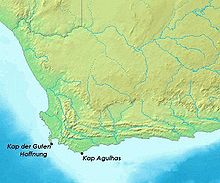 Map of the Cape of Good Hope and Cape Agulhas, the southernmost point of Africa

Cape Agulhas is a rocky headland in the Western Cape, South Africa. It is the geographic southern tip of Africa and the official dividing point between the Atlantic and Indian Oceans.

The actual division between the ocean currents is where the Agulhas current meets the Benguela Current that fluctuates seasonally between Cape Agulhas and Cape Point.

Historically, the cape has been known to sailors as a major hazard on the traditional clipper route and is sometimes regarded as one of the great capes. It was most commonly known in English as Cape L'Agulhas until the 20th century. The town of L'Agulhas is located near to the cape.