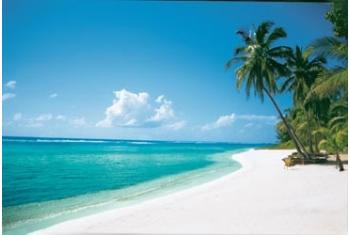 The beaches of Cayman Brac 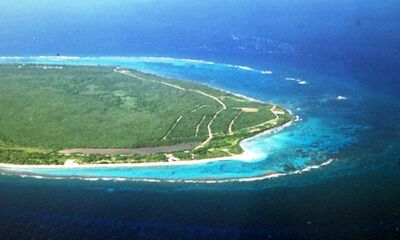 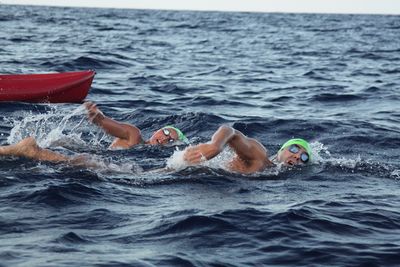 Lexie Kelly and Steven Munatones on record across The Bogue, an 8 km channel swim from Cayman Brac to Little Cayman Island in the Cayman Islands, photo courtesy of Norma Connelly

Cayman Brac is an island that is part of the Cayman Islands. It lies in the Caribbean Sea about 90 miles (145 km) northeast of Grand Cayman and 5 miles (8 km) east of Little Cayman. It is about 12 miles (19 km) long, with an average width of 1 mile (2 km). Its terrain is the most prominent of the three Cayman Islands due to "The Bluff", a large central limestone outcrop that rises steadily along the length of the island up to 140 feet (43 meters) above sea level at the eastern end. The island is named after this prominent feature, as "brac" is a Gaelic name for a bluff.

Christopher Columbus sighted Cayman Brac and its sister island, Little Cayman in 1503 when his ship was blown off course during a trip between Hispaniola and Panama. He named them "Las Tortugas" because of the many turtles he spotted on the islands. The Cayman Islands were renamed by Sir Francis Drake, who came upon the islands during a voyage in 1586. He used the word "Caymanas", taken from the Carib name for crocodiles after seeing many of the large crocodilians. Many people believe he had only seen the Rock Iguanas that inhabit the island today.

Being so close to Cayman Brac, the stretch of water between Little Cayman Island and Cayman Brac is becoming increasingly popular as an enjoyable open water swimming channel, known as The Bogue.

During the heyday of piracy, pirates would use Cayman Brac as a haven and a place to replenish their supplies as there are a number of fresh water wells on the island and had many sources of food included in the local flora and fauna.

Of interest to scuba divers is a 330-foot (100-m) Russian Koni class frigate built in the Soviet Union in 1984 for the Cuban Navy. It is one of only a few sunken Soviet naval vessels in the Western Hemisphere, and the only one that is easily dived. The Koni II class frigate was purchased and sunk by the Cayman Islands government in September 1996.

Cayman Brac also appeals to visitors of many persuasions besides divers. Caves are found around the island, offering spelunkers a glimpse of delicate underground formations. Steps and, in some cases, ladders have been constructed to allow visitor access to more remote caves. One cave, Rebecca's Cave, contains the grave of a young girl lost in a struggle against the ravages of the great '32 Hurricane.

The majority of the tourism sector is concentrated on scuba diving, although this is in recent decline in the hospitality sector, with one of the two local hotels, Divi Resorts, closed operations in 2006.[5] The island's economy was also adversely impacted by significant damage from Category 4 Hurricane Paloma in November 2008.