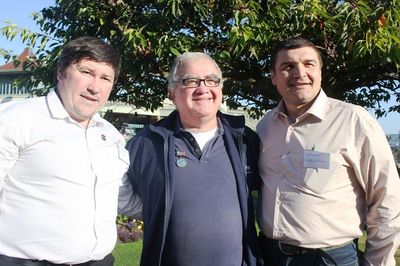 Alexandr Brylin (left) and Gregori Prokopchyk (right) at the 2014 Global Open Water Swimming Conference on the Isle of Bute, Scotland together with Kevin Murphy (middle)

The Diomede Islands Swim was a 5.6 km tandem swim between the Diomede Islands by 38-year-old Alexandr Brylin and 45-year-old Grigorii Prokopchuk on 1 August 2014. It was selected as the 2014 World Open Water Swimming Performance of the Year.

The charity swim to help sick children in South Africa and Russia and to attract scientists’ and physicians’ attention to studies of the capabilities of a human body subjected to low temperatures.

The Diomede Islands Swim was conducted under the guidance of coach Viktor Godlevskiy.

The administrative support of the Russian tandem swim included the Russian Geographical Society, Russian Association of Polar Explorers, Government of the Republic of Sakha (Yakutia), Chukotka Autonomous District’s Administration, Blagoveshchensk City Administration, Legislative Assembly of the Amur region, Border Guard Administration of the FSB of Russia in the Chukotka Autonomous District and the Kamchatka territory, Government of the Kamchtka Territory, and the Permanent Mission of the Republic of Sakha (Yakutia) in the Far Eastern Federal District.

The transport and logistics were taken care of by Yakutia Airlines, The Chukotka Committee for Sport and Tourism, the TSO Lorino Sea Hunters, Polar Explorers’ Association for satellite phones, Chukotka Discovery for permits, and World of Travel for visa support.

The scientific research group included medical monitoring of the swimmers by Amur Regional Centre for Medical Prophylaxis and experimental research during the swim by the Institute of Physical and Technical Problems of the North named after V. P. Larionov of the Russian Academy of Sciences as well as insurance by Gelios-reserve. Irina Makarova of the Moscow Academy of Entrepreneurship (Blagoveshchensk branch) provided translation services, RekArt provided advertising and promotion while video coverage was taken by Viktor Muzhetskiy.

The swim between the islands was organized by the Amur Regional Federation AQUAICE-sport together with the International Ice Swimming Association and a charity organization MadSwimmer from South Africa with the support of the Border Guard Service of Russia, Russian Association of Polar Explorers, the Governments of the Reoublic of Sakha (Yakutia), Kamchatka territory, Chukotka Autonomous District and Amur region, Blagoveshchensk and Belogorsk City Administrations.

A documentary film was made with the financial support of the Kamchatka real estate agency Variant.